How to send emails from Dream

I recently learned the OCaml ecosystem has most of the libraries needed to build email features, but I wasn't able to find an example that brings all of those pieces together. I wanted a simple example I could easily adapt to build common account verification and password recovery workflows in the Dream web framework. This post is my attempt to solve that problem and explain what I learned in the process. The accompanying code can be found here.

As an application developer, my main concerns when sending mail are:

To test how easily I could satisfy these requirements, I built a web app that lets the user send an arbitary email. 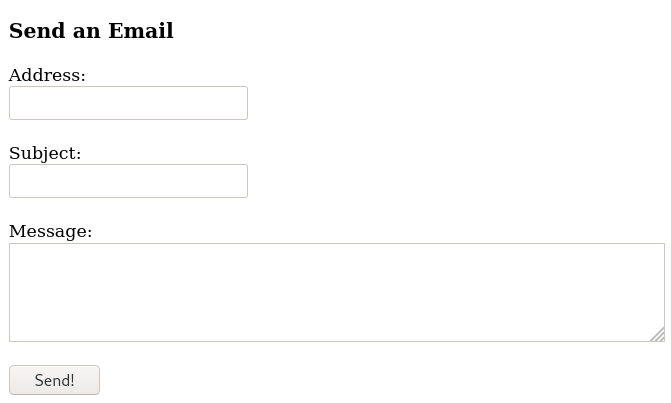 The app has two parts:

I decided to utilize the library emile for address validation. An email address might be invalid for reasons outside of the application's control (like the domain going way), but emile at least provides a way to check a given string conforms to 5(!) RFCs relevant to parsing email addresses. Check out the tests to see the impressive diversity of valid email addresses on the web.

The library provides several different predicates for checking addresses. I utilized Emile.of_string, which generates a simple result type, like this:

This way, if a user provides an invalid address, the form displays a simple warning message and won't queue any email tasks.

The second issue I needed to address is handling the email send process with a background worker (queue_email in the code excerpt above). Sending an email can be a slow process, especially if you need to make additional database queries or render images to produce a customized email. That shouldn't block the web server from quickly responding to the user's requests. Instead, the server should record the email task in a queue, to be handled by a background worker that isn't as sensitive to latency.

There are several different technologies that can be used to solve this problem, for example RabbitMQ, Redis and SQS. I decided to use RabbitMQ because I didn't want to tie my implementation to one cloud provider and RabbitMQ is supported by amqp-client on OPAM. This isn't the only way to go: for Redis and SQS, you might have success with the packages redis or aws-sqs, respectively.

The worker and server process share a common function for establishing a connection to RabbitMQ:

I was initially little confused about why I needed a "channel" when I already had a connection to the broker. Both the worker and the server connect to the RabbitMQ Broker via TCP. It's common for clients to need several connections to the broker, but it's costly to have many TCP connections. RabbitMQ lets us avoid this cost with channels, which are like "lightweight connections that share a single TCP connection", according to these docs.

I created this function to submit messages to the queue:

Here the server writes the address, subject, and text into a record type that can be serialized to JSON before being pushed into the queue.

The worker process, queue_worker, is fairly simple to define:

The worker consists of an infinite loop. When the worker wakes and finds tasks in the queue, it uses yojson to deserialize the messages and passes them to send_email. If no work is available, the worker just sleeps for 5 seconds.

Sending Email with cohttp and Mailgun

In order to send mail, I set up a trial Mailgun account. I selected this provider for several reasons:

Mailgun's API allowed me to send an email by sending a POST with an API key and form data, like this:

The endpoint replies with either 200 and a JSON body like this:

or else a 400 and an explanation of why the request was rejected. In my tests, a successful API request typically took between 0.5 and 1 seconds. For comparison, the webserver can serve the email form in less than 200 microseconds, so the performance benefits to shifting email tasks to a background queue are nontrivial.

Mailgun supports SMTP but they recommend using their API, especially for sending large amounts of mail at once. I used letters to test their SMTP support with this script:

I ran into some difficulties because Mailgun does not consistently follow RFC 4954 (thanks to Calascibetta Romain for figuring out the problem and creating a patch). Once I applied the patch, I was able to send mail successfully.

I haven't fully explored the tradeoffs of using SMTP versus an API. The main goal of my experiements was to confirm that if I needed to integrate with a specific SMTP server, I knew how to do so.

This example focused on email, but task queues and background workers can be used to implement other important pieces of functionality for web applications. For example, I've utilized celery in the past to generate weekly reports and schedule recurring ETL jobs. This exercise was a nice opportunity to see how one would construct a system similar to celery in OCaml. It also provides a simple illustration of how we can utilize queues to facilitate horizontal scaling. If the volume of email requests grows too big for one machine, we can put the web server and the worker on separate instances or have multiple worker instances consuming from the email queue.

I didn't cover error handling in this example, but that's clearly an important piece of functionality to include when building a production email system. At a minimum, it would be useful to add a retry mechanism in the event that Mailgun is unavailable.

I found the resources below helpful for working on this project:

If you ended up looking through the source code for this example, let me know how what you thought! I'm interested in adding more tutorial resources to the OCaml ecosystem, so feel free to post a PR or issue to dream-email-example if you have ideas about how to make these resources better.