In the Fall of 2013, I developed a camera-based keyboard system as my term project for an image analysis course. This page provides a brief summary of my project.

Virtual keyboards are still actively researched in computer science and electrical engineering. The system I implemented uses techniques published in [1]-[3] between 2010 and 2013. Camera-based virtual keyboards require a number of interesting image analysis techniques to implement. They are particularly of interest in mobile applications and in areas where one would like to avoid the cost of a physical keyboard (for example, projects providing computers to people in the developing world). 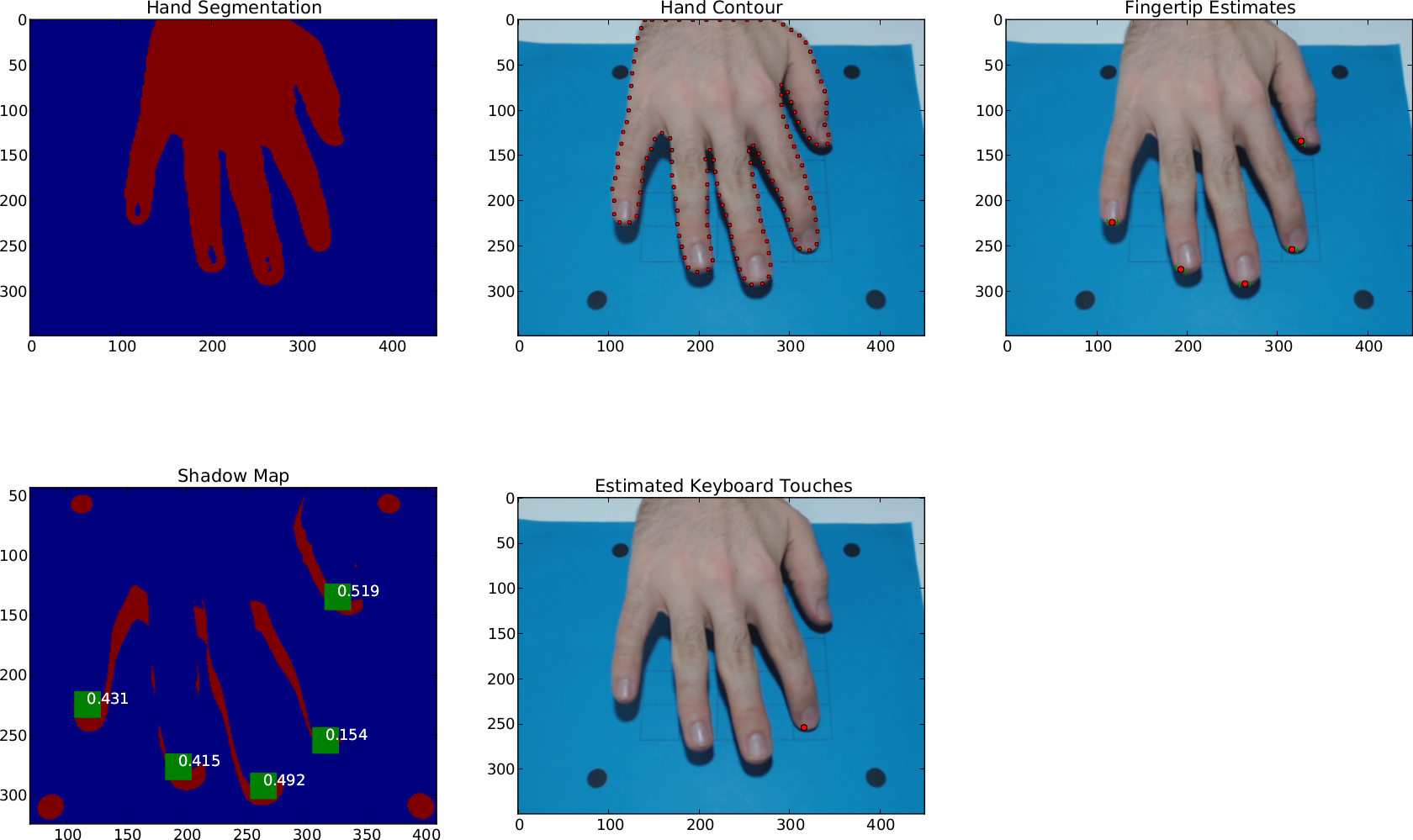 I addressed the second problem using a technique called shadow analysis, which is discussed in [1]. With this technique, we perform another segmentation on \(I\), to locate the regions in the image that represent the shadows of the user's hands. Then, we examine small neighborhoods near the user's fingertips. If the proportion of shadow-pixels in a given neighborhood is above a certain threshold, we infer that the corresponding fingertip is not in contact with the tabletop (because it has a shadow). Otherwise, we declare that fingertip to be touching the keyboard.

The last problem is solved by making some assumptions about the geometry of the keyboard and imaging system. I assumed that the keyboard template displays four easily identifiable control points arranged in a rectangle, and that the front edge of the control rectangle is parallel to the \(x\)-axis of the camera's coordinate system. With these additional assumptions, it isn't too hard to invert the perspective projection and recover the keyboard-space coordinates of each keypress from the image-space coordinates of the fingertips.

After implementing my virtual keyboard system in python, I analyzed its performance under different lighting and usage conditions. My tests suggest that a camera-based user interface that uses shadow analysis will work best under conditions where one has fine control over the lighting conditions and the user does not need to enter very much data at one time. For example, a camera-based user interface would work well in an interactive museum exhibit, but it might not be a very good tool for word processing in a dark coffee shop. Currently, camera-based keyboards cannot provide the speed and accuracy achievable on physical keyboards (but for that matter, neither do touchscreen keyboards).

Below are links to the paper and code I wrote for the term project. I used the code within ipython to conduct my experiments, and used the OpenCV project to get data from the camera. OpenCV's support for python is still under development, so if you examine my code you may have to adapt it to work with your particular hardware and copy of OpenCV.